Over two decades ago, Williams and Hobson (1995) revealed during their research that touristic VR environments enriched with interactive possibilities and designed in an immersive fashion have a great impact on tourists’ planning behavior and can, therefore, influence the entire tourism sector. Williams (2006) stated how VR technologies in combination with multimedia can aid destination marketers in creating memorable experiences incorporating many different factors including brand loyalty and perception thereof.

One of the main benefits of applying VR systems is the fact that clients can ‘sample’ a destination beforehand. Destinations can provide some previews for clients to enjoy at fairs, in travel agencies or even in their respective homes. Experiencing these snapshots of a destination aids the customers in making an informed decision. Even though the client might not have decided yet, images of the viewed destination stay in the clients’ mind and possibly induce a desire to visit the destination in real life (Cheong, 1995). This matches with what the European Travel Commission (ETC) wrote in their 2006 report on global trends in tourism: “Marketing messages based on experiences and feelings will have a greater importance in travel decisions – what can you do at the destination and what will the personal benefits be?” (p. 7). The UNWTO (2007) also identified VR as a major influence on the development of destination management.

How can VR influence the customer journey?

Taking reference to the 4 P’s of the marketing mix, we can examine closer how the marketing mix could influence the customer journey. One of the 4 P’s, Promotion, includes all the effort undertaken by a destination management organization (DMO) to spark or increase awareness and interest in customers’ minds. This is presumably an effort that will strongly influence the first stage of the customer journey, the dreaming phase.

Kaplanidou and Vogt (2006) identified that ICTs have the potential to present significant travel information about a destination to the customer. They argue that this can be utilized as a means to provide some destination information to customers before they have begun to actually plan their trip, in the dreaming phase. In anticipation of their visit to a destination, tourists develop an image of a destination that is made up of previous experiences, word of mouth, press articles, different advertising measures and common beliefs (Baloglu & Brinberg, 1997, as cited in Buhalis, 2000). By implementing VR into their promotional strategies, DMOs could possibly influence customers immensely in their travel destination choice. 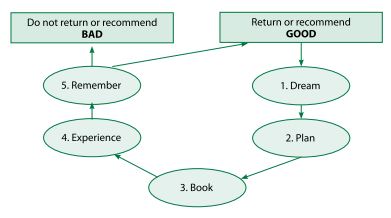 The Customer Journey according to the UNWTO

As was established earlier, VR applications can stimulate our senses to increase the customer’s experience or first impression even further. This would improve the tourists experience even more by including sensory elements into the marketing mix. Several possible benefits of VR applications have been identified in previous research, however, so have different risks. In chapter 7 of this paper they are explained in more detail.

The importance of a unique emotional proposition

Morgan, Pritchard, and Pride (2002, p. 42f., as cited in UNWTO, 2007) state that emotional reactions and triggers are very influential on customer decisions. They argue that “what persuades potential tourists to visit and return to one place instead of another is whether they have empathy with the destination and its values”. This has changed from the concept of the unique selling proposition (USP), rather, DMOs now have to use a unique emotional proposition (UEP) to differentiate themselves from the competition.

Not only is that necessary because so many destinations are trying to establish themselves in the market, but also because this multitude of offers leads to destinations being unable to differentiate themselves with physical attributes and factors, such as climate, from other competitors (Neuhofer, Buhalis & Ladkin, 2012). As examples could be stated the claims to be ‘a subtropical paradise’ (climate) or ‘the river city’ (geography). Both of these are traits that can be found in destinations all around the world (UNWTO, 2007; Pike, 2008). Peralba mentioned in 2006, that consumer experiences differentiated by emotion can make them benefit greatly and create a direct relationship with the product (Trout & Partners, 2006, as cited in UNWTO, 2007). Morgan, Pritchard, and Pride (2004) stated previously that interactive media can also aid in relationship building, a relationship to the customer so strong it can be resurrected and sustained post-trip.

When looking at the above-mentioned definition of UEP by the UNWTO, it is clear how VR can come into play. As was covered before in chapter 3, VR can trigger strong emotions through the ability to stimulate several of our senses. While the second aspect of the definition refers rather to an aspect unique to the destination itself, it is also applicable to translate this unique offer to the VR realm. While it is certainly a trend that is up and coming, there are only a few examples of destinations, such as the ones mentioned below, offering a unique approach to promotion that competitors are unlikely to possess. The author believes that this ‘novelty bonus’ could be reason enough for some people to visit the destination (if VR services are offered on site and are not designed for home use).

Boehlefeld (1996; as cited in Wan et al., 2007) suggests that every medium is different in its way of presenting information to potential customers. Were marketers to understand the different attributes that every medium possesses, they could take advantage of their knowledge and educate potential customers on how to best use it. The author relates this directly to the definition of UEP, in a sense that proper education can aid in exceeding the clients’ expectation. This could be as simple as an aid to customers in the use of VR HMDs provided by travel agents, for them to properly immerse into the VE.

As mentioned in chapter 3, a stimulation of the human senses can have great influence on the perceived experiences and holds an important role in VR applications. Giordimaina (2008), Pawaskar and Goel (2014) point out the importance of businesses to use a multisensory approach when marketing their products and services. Due to the fact that markets are being flooded with a multitude of new products and services, traditional methods like a mass-marketing approach do not suffice anymore in order to reach a sufficiently sized target group with one’s marketing efforts. They make us aware that for too long the sense of sight has dominated promotional practices while the other four senses (hearing, touch, smell, taste) have been largely neglected by practitioners. That is despite the fact that customers utilize every sense available before making a decision about buying a product or service. Several destinations are actually already experimenting in trying to create a UEP for their customers (Pawaskar & Goel, 2014).

The existing use of VR in destinations

At the time of undertaking the research for this article, the author gained insights into the intentions of some DMOs. While several destinations around the world are contemplating the use of VR as a promotional measure, only very few have actually applied a strategy involving true VR content. Seen as the pioneer of DMOs applying VR is definitely Destination British Columbia in Canada (Destination BC). Another major DMO (on a national basis) with a VR concept is Tourism Australia. Their campaigns will be highlighted in more detail here. The tourism board of South Africa has also implemented several VR aspects into their promotion, however, the campaign will not be covered further in this article (South Africa Tourism Board, 2015).

According to information released by the Destination BC DMO, their ‘The Wild Within VR Experience’ campaign using VR as a promotional tool is the first of its kind in North America, however, the author was unable to find other destinations around the world with similar campaigns operating at a comparable scope with a start before Destination BCs (Destination BC, 2014; DTTT, 2015). In December 2014, they released their VR experience. While it was initially destined to be showcased at trade shows and for partners at fairs, it has since been made available online to the public.

The DMO showcases some stunning 360-degree video footage from the Great Bear Rainforest, a diverse and protected area located along the central Pacific coast of BC. The footage is shot in both first person and third person view and follows general touristic experiences from the view of the visitors. Viewers are journeying along the coastline in a commercial whale watching boat and later have the option to either go visit a sea lion colony or to go hiking in the mountains, adding an element of interactivity.

As pioneers in the field of VR destination promotion, Destination BC had to use 3D printers to create a custom rig for multiple GoPro cameras that they were able to either mount on a backpack or a drone that was used for filming. While the VR experience was initially designed for the Oculus Rift, the DMO kept in mind the impending release of consumer-grade headsets of every brand, making sure that the contents of its production can be adapted to different platforms (Destination BC, 2014).

Having cost approximately CAD $500.000 in the production, Destination BC is of the firm belief that the VR approach is the right way to go in tourism marketing for companies fighting for time in customers’ short attention spans. They decided on the implementation of new technologies as a vital part of their 2014 corporate strategy update. According to them, VR lets customers “experience [the] destination in a new and unique way that has not been possible before” (Walden, as quoted on Destination BC, 2014; VirtualRealityTimes, 2014; Alba, 2015; Mandelbaum, 2015; Meissner, 2015).