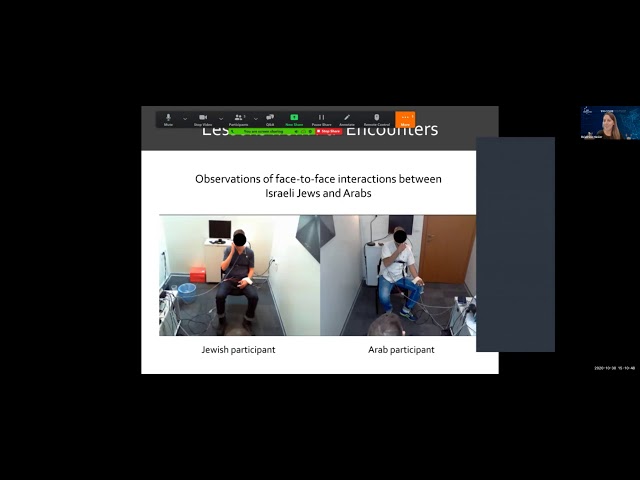 #Title : XR for Peace – The Potential of Immersive Psychological Interventions for Conflict Resolution

This talk made in October , 2020 has been given during the International Congress of Extended Reality in Sciences (https://dimensionsxr.com) organized by the Swiss Society of Virtual and Augmented Reality (SSVAR – https://ssvar.ch)
#Bio
Béatrice Hasler Lev-Tov (PhD, University of Zurich) is an Assistant Professor and the Director of the newly founded Virtual Reality Lab for Conflict Research (VR-CORE) at the Sammy Ofer School of Communications at the Interdisciplinary Center (IDC) Herzliya in Israel.

She specializes in the psychology of virtual reality and its social applications, with a particular focus on intercultural and intergroup relations.

She uses VR to study human behavior and decision making in interpersonal and intergroup conflicts, and explores the potential of VR as a new method for conflict resolution.

Prior to her current position, she has been a Post-Doctoral Research Fellow in the Experimental Virtual Environments Lab for Neuroscience and Technology at the University of Barcelona and the Advanced Reality Lab at IDC Herzliya.

Her Post-Doctoral research has been funded by a Marie Curie Intra-European Fellowship and two fellowships from the Swiss National Science Foundation.

#Abstract
XR for Peace – The Potential of Immersive Psychological Interventions for Conflict Resolution
Ongoing violent conflicts around the world remain one of the greatest challenges and threats to humanity. Alongside the political path to peacebuilding, the scientific community has embarked on the challenge of counteracting the causes of violent conflicts. Social psychologists have developed interventions that aim to overcome the psychological barriers that prevent a peaceful resolution of conflicts. However, these psychological interventions have only limited success.
Could XR technologies be used as an alternative and perhaps more powerful method for conflict resolution and peacebuilding?
After a brief introduction to the psychology of intergroup conflict, I will present examples of our recent studies conducted in the context of the Israeli-Palestinian conflict that demonstrate the potential of virtual reality to enhance peace promoting attitudes and emotions.