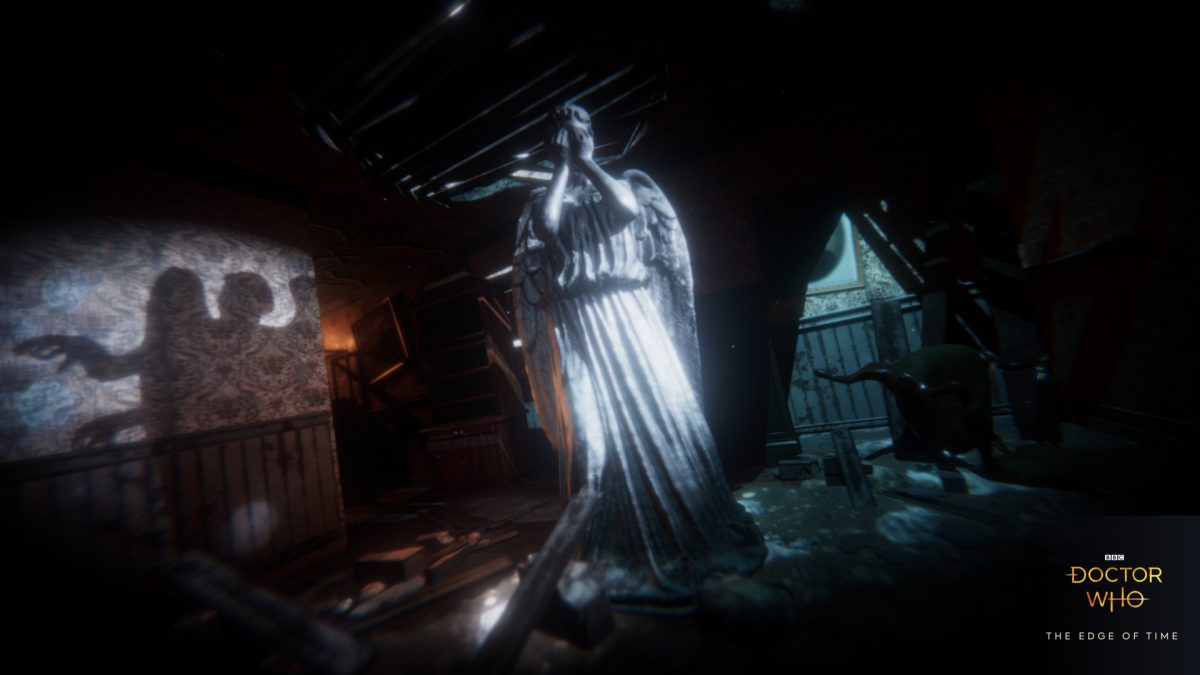 List off the must-have moments you’d expect from a Doctor Who VR game and The Edge of Time often delivers.

There’s that bit where you walk in and out of the Tardis, struggling to get your head around its physics-defying dimensions. There’s the bits where you hold your Sonic Screwdriver to a lock and enjoy an entirely unearned sense of slickness when it clicks open. And, yes, there’s the bits you contemplate ripping your headset off to spare yourself the mounting horror of being hunted by Weeping Angels.

Edge Of Time lives and dies by this fan service. It can at times sweep you up in its ridiculous antics and take you along for the ride with a giddy smile on your face, just as the best Who episodes do. Much like any season of the show, though, the quality in delivery varies wildly throughout, leaving a lingering wish that developer Maze Theory had leaned on the VR antics just a little harder.

You play as an unnamed companion to the Doctor here, traveling across different times and locations to stop a new threat. The Doctor herself is locked away somewhere inexplicably far off, only ever appearing through holographic transmissions. Jodie Whittaker is on typically fine form in the moments she does appear, though it’s often to lend the narrative a drowsy dose of exposition. An AI partner instead joins you for most of the game, sounding suspiciously similar in tone and wit to Whittaker herself. She’s essentially a stand-in Doctor that leaves you longing for the genuine article.

In that sense, Edge of Time often feels like it’s been adapted straight from a TV script rather than specifically developed with VR in mind. There’s a heck of a lot of standing around and listening to other people explain why something is terrible rather than you seeing it for yourself. In fact, the game almost entirely avoids meeting any friendly allies or aliens face-to-face, making it hard to form a connection with the cast and often leaving the worlds lifeless, despite crisp visuals. It seems like a missed opportunity not to be staring down Cybermen or shaking hands with lizard people.

Plus the series penchant for nonsensical last-minute twists doesn’t hit as hard when they’re essentially delivered over an intercom.

It’s frustrating given there are many moments of pure VR excellence here. An early encounter with a monster in a laundrette gives you a hilarious fright, for example, and The Tardis has been brought to virtual life with genuine love and care. For a second, you might even think you’ve really been whisked away to the set of the show.

The Edge of Time offers both smooth locomotion or teleportation with all the bells and whistles. You can edit movement speed, turn type, blinders and more. There are a few moments of forced smooth locomotion, though they shouldn’t be too problematic.

For better or worse, though, Edge of Time does scares the best. It might even do them a little too well for the most dedicated Who fans. There’s a few of the biggest jump scares I’ve had in VR here. Those Angels, for example, keep your heart rate up in easily the game’s most impressive sequence, making you painfully aware of your every move and too scared to even turn around. Other levels carry an uneasy atmosphere that makes seeing the game through an unexpected challenge.

It’ll be enough to stop some fans in their tracks, so much so you could argue Maze Theory goes in a little too hard on the horror. That said, the concept of the Angels in VR is one that’s tough to pass up and the studio does the premise justice. I just would have liked to have seen more of the wonder and awe of many of the Doctor’s adventures to balance out the moodiness.

Many of the game’s other ideas are repurposed from traditional tropes. There’s a handful of puzzles that are snappy to solve, though never feel unique to the franchise itself. Redirecting lasers to open doors could have been lifted straight out of any other game and, well, I’m pretty sure finding a safe code on the back of a picture is in every other VR game.

Your late-game encounter with the Daleks, meanwhile, results in fine, formulaic stealth segments followed up by a fun, forgettable on-rails shooter. For Who diehards, these moments will no doubt delight, but they don’t disguise relatively stripped back game mechanics. They help round it out to a respectable two to three-hour runtime, which I tackled in one sitting without ever feeling bored, if not always illuminated.

Perhaps Doctor Who’s biggest enemy is Doctor Who itself. There’s so much wacky potential for a feature-length VR game here that meeting those expectations is almost impossible. We saw just a snapshot of that in the BBC’s excellent Runaway VR short, an animation bursting with the charm, wit and invention the series is known for stuffed into 13 minutes. The Edge of Time is grittier, deeper even, but it doesn’t match the personality, bravado or intuition of control. Perhaps there’s a lesson to be learned there.

Who is at its best when there’s a hook; a gimmick so playful and innovative that anyone can get carried away in the madness that ensues. Instead of testing those waters, The Edge of Time settles for bringing the series’ most tried and true elements directly into headsets in hopes of winning over dedicated fans. It plays more like a rejected episode of the TV series rather than something that fully embraces its platform. The Who faithful be satisfied in that safety, I suspect, but I personally can’t help but wish this was a little more dangerous.

Note: We are changing our review scheme to a five-point scale, without half points, rather than a 10-point scale with half points like before. All past reviews will stay as they are, but all future reviews (that includes games, non-game apps, hardware, and more) will all be reviewed using the same five-point star rating scale. Expect the visual representation of this new scale to change with a more attractive style soon.

You can read more about the new scoring policy here.

The post Doctor Who: The Edge Of Time Review: A Few Sonic Screws Short Of A Winner appeared first on UploadVR.

Source: Doctor Who: The Edge Of Time Review: A Few Sonic Screws Short Of A Winner