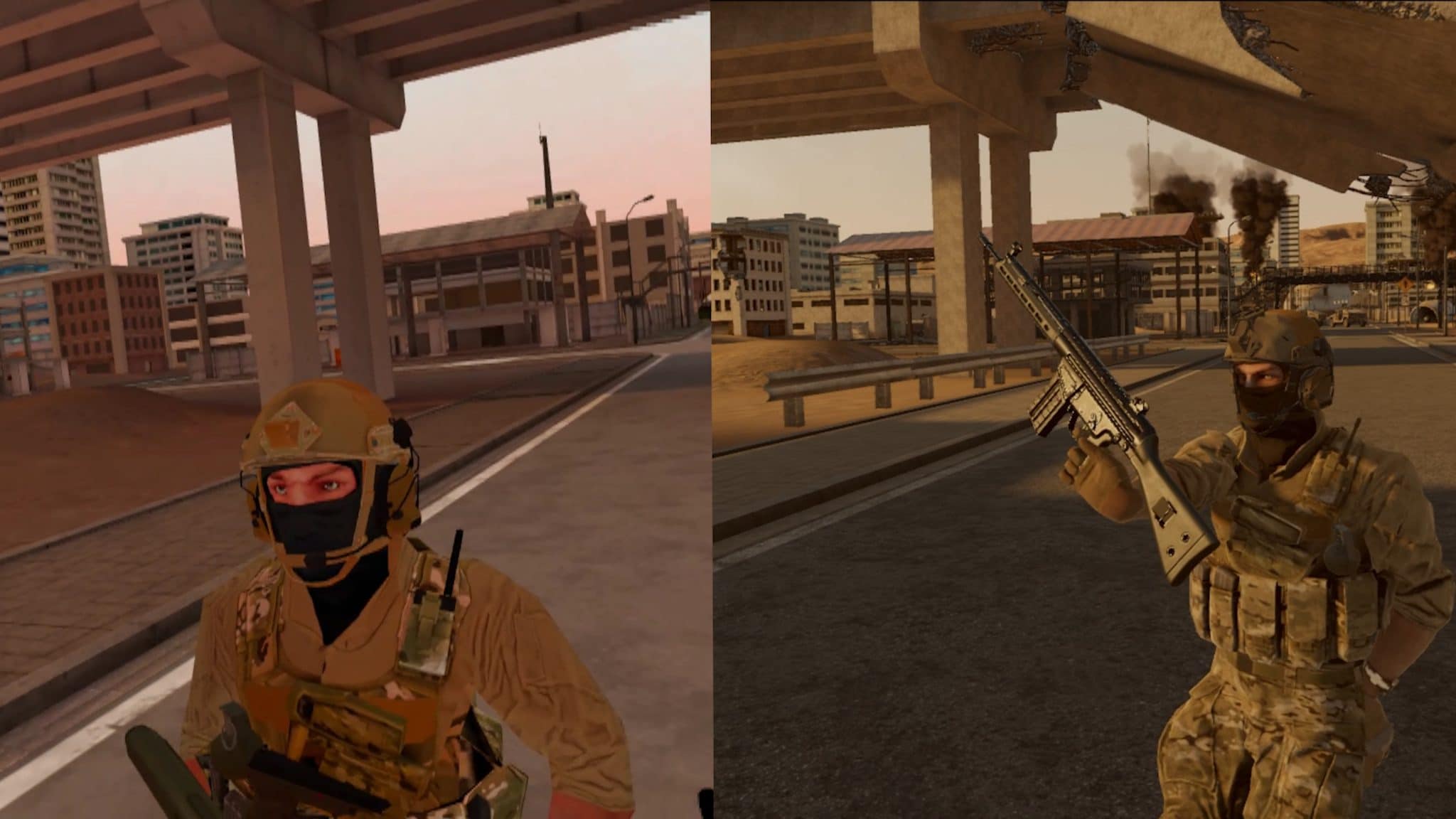 Every game of Onward starts with the chance for a team to discuss and strategize around a whiteboard, drawing on attack plans and fine-tuning strategies, with players tense about the challenge that faces them. It’s an atmosphere I’d imagine is quite similar to the Zoom calls between the game’s creators after this week’s events.

It’s safe to say that Onward’s long-anticipated Oculus Quest launch has not been quite as smooth as you might have envisioned. Certainly, on Quest itself, things appear to have gone very well. Despite pared down visuals, the game has rapidly racked up a stack of positive review scores on the Oculus Store. We didn’t let the dog-eared look stop us from giving the game our full recommendation; Onward remains a brilliant online shooter. For the existing PC version, however, it’s a bit of a different story.

In order to enable cross-play between PC and Quest, a feature developer Downpour has long promised, Onward has essentially been rebuilt. At first, we thought this would simply mean the PC version would reorganize a little geometry to match the revamped Quest maps, which have been tweaked to optimize performance. But the arrival of the 1.8 PC update literally painted a very different picture; Onward on PC has been dramatically dialled down in order to accommodate cross-play.

Check out the video above, showing the popular Suburbia map both before and after the patch. The difference is staggering; foliage is entirely removed, effects like fire and smoke are gone and textures are hugely simplified. Downpour says it’s working on further graphics improvements on PC, but there’s a big gap to fill here to get it back up to snuff. Indeed, the Steam page for the game now automatically plays a trailer for an older version of the game that looks better and even touts its own graphical improvements. It’s truly an unprecedented situation in VR.

The usual next steps are already surfacing. At the time of writing, Onward’s ‘Recent Reviews’ on Steam have shifted from ‘Very Positive’ to ‘Mixed’ and the game’s Discord was filled more with cries of anger than delight until Downpour’s rapid response, allowing players to roll back to v1.7 via a beta channel while the team focuses on improving the current visuals.

Still, that a game would so obviously subject its existing version with a healthy community to such a blatant step back sends a clear message about the shape of the VR industry in 2020. Because the harsh reality of the situation is that, whatever the backlash on PC may amount to, this was the ‘right’ decision purely from a business perspective.

Whatever is said online, this is looking like a very successful week for Onward. At the time of writing, less than 24 hours from launch, the Quest version of game has nearly 1,000 reviews and the vast majority of them award full marks. The game, as pared down as it may be, now has access to an entirely new, likely much greater revenue stream. Clearly, lots of Quest owners are very happy to have the game, no matter the difference in fidelity.

The plight of PC VR owners was, it appears, insignificant in comparison.

We all know what Quest represents to the VR industry – we’ve spoken ad nauseam about developer’s vastly improved prospects when releasing on the platform. Heck, it’s doing so well it looks like we’ll be seeing a successor in the very near future to further chip away at its few remaining quirks.

But the headset’s limited horsepower puts it at odds with competing hardware in fascinating ways. In the console business, we’re used to seeing less powerful hardware lead a sales race and supporting software reflect that. Sony’s PS2 couldn’t measure up to Microsoft’s Xbox or the Nintendo Gamecube from a technical perspective, but came out miles ahead of the competition in sales and set a precedent for developers to release on that platform irrespective of the graphical benefits they’d get from targeting Xbox or Gamecube exclusively. Something somewhat similar is happening right now with the Switch, a console so popular that developers are pulling off all sorts of sorcery to get their PS4 and Xbox One games running on it, no matter how blurry the results may be.

Quest is unique, though, in that the power difference between it and PC VR or even PSVR is far, far wider and yet the strides in accessibility are much, much more important. For developers, this means even greater compromise than we’re used to seeing in the console scene. At launch, we speculated about what Quest’s potential success could mean for the graphical fidelity and scale of VR gaming going forward. This week’s events are as close to the ‘worst case scenario’ end of that speculation for PC users that we’ve yet seen.

In a statement made on the game’s Discord yesterday, the Downpour founder Dante Buckley noted: “In the end we didn’t allow ourselves enough time to bring back the full immersive experience for PCVR: the current graphics in particular are a noticeable step down from what you were used to in 1.7. I apologize for not having communicated that clearly with you, or giving you the option to make a choice between 1.7 and 1.8 while we worked on solving these issues.”

Downpour places the blame — if you can really call it that — at its own door, then. This week’s update introduced UK-based Coatsink as the game’s new publisher and Facebook has been infamously restrictive with curation on the official Quest store. It’s notable too that Onward pushes the boundaries of Facebook’s outlawing of Early Access games on the Quest store, something I don’t think would happen if the powers that be didn’t think there was a buck to be made.

Whoever made the call, though, the reasoning is clear; it was more important to get the game out and selling on Quest in July than it was to maintain the quality of the existing version.

It’s a call that’s hugely indicative of the wider precedent for VR moving forward. Quest has become not just a promising new contender but the definitive destination to deliver your game to. As we move further away from the era of PC VR as the dominant platform, these stumbling blocks will be fewer and far between, but in the heat of this moment it seems some existing VR-owners are destined to lose out like this. Developers that were perhaps once pushing the boundaries of the PC platform will now be drastically scaling down what some of those boundaries are for future projects. It’s as close to collateral damage we’ve yet seen in this transition point.

I can’t help but wonder what the future holds in this regard. Is Onward a one-off? Or is Facebook currently pouring extra millions into its two remaining Rift exclusives, Lone Echo II and Medal Of Honor: Above and Beyond, to get them running on Quest too? If so, would the scale of the PC projects suffer and would we ever even know about it?

This week’s events help cement a necessary, if ugly (literally speaking), transition point for the VR industry. We are seeing an entire industry pivot to a place we didn’t think it would be in by 2020; games and experiences built for more powerful hardware are scraping to get onto Quest and developer roadmaps are now centering around that shift. The transition has threatened to be awkward and cumbersome, but actually so far is proving to be largely smooth.

But Onward has become an inevitable friction point. What is worrying is this: when developer vision and intention is compromised in the name of making the most money, something more important than profit is lost. Whether or not Onward crosses that line is in the eye of the beholder, but it paints the future of VR fidelity and vision with a slightly more troublesome brush.

Update: A paragraph above was clarified after publication to include a statement from Downpour regarding the thinking around the decision to update the game.

The post Editorial: Onward’s PC Downgrade Is An Ugly, If Necessary, Transition Point For The VR Industry appeared first on UploadVR.

Source: Editorial: Onward’s PC Downgrade Is An Ugly, If Necessary, Transition Point For The VR Industry