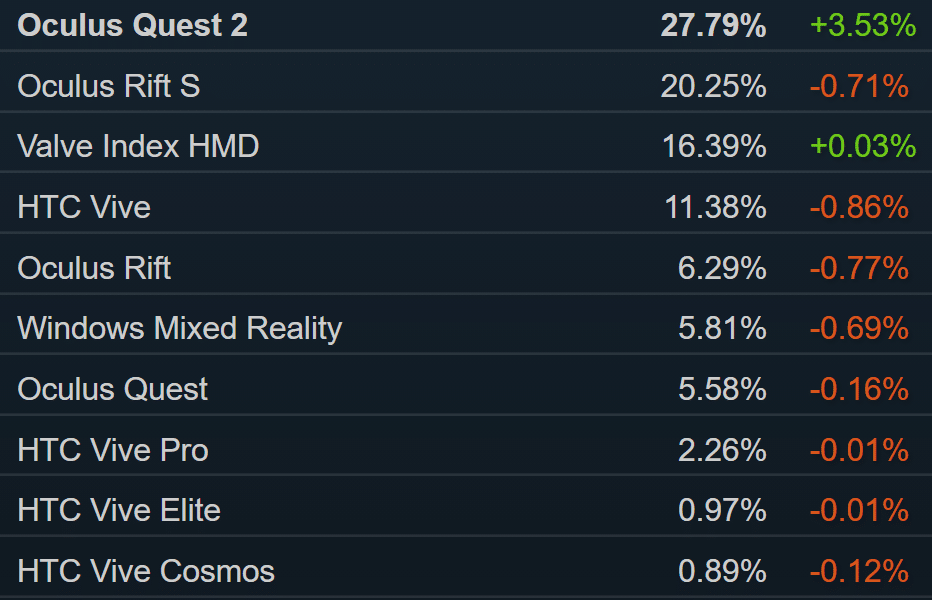 The survey is offered to a random sample of Steam’s userbase each month. If you choose to accept, it uploads your PC specifications along with SteamVR’s log of any headsets connected in the past month.

Four consumer Oculus headsets are listed in the data: Rift, Rift S, Quest, and Quest 2. Together they now make up 60% of SteamVR use, Facebook’s largest share since March 2016, when the 2014 Development Kit 2 (lacking support for tracked controllers) was still in wide use.

Facebook’s other 27% comes from its now-discontinued PC-only headsets, Oculus Rift and Rift S. Meanwhile Valve’s Index HMD is holding steady at just over 16%, impressive given its $1000 all-in price.

HTC headsets once made up 2 in 3 of SteamVR at its peak in 2016. Facebook & Valve have almost entirely eaten HTC’s lunch in recent years, with its share now just 15%. HTC is expected to announce new headsets at ViveCon this month.

The share of Microsoft-backed Windows MR headsets slowly contracted throughout 2020. That trend was briefly reversed after the November launch of HP’s Reverb G2, but has now resumed again.

The overall percentage of Steam users with a VR headset dropped slightly, from 2.3% to 2.22%. Since we don’t know the exact userbase growth rate of Steam overall, this could still represent VR growing – just not at the same speed as PC gaming in general.

Source: Facebook Headsets Now Make Up 60% Of SteamVR Use