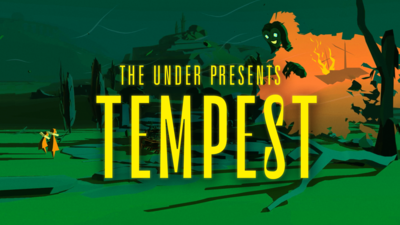 If you have a Rift or Quest you can attend — and become part of — a live performance of William Shakespeare’s The Tempest.

Starting July 9 showings will be presented in Tender Claws’ groundbreaking virtual theater. Tickets for The Under Presents: Tempest sell for $15 and that buys you a live performance from an actor who casts you in the play for a show running approximately 40 minutes.

I attended a preview performance recently and, in true Tender Claws fashion, it is unlike anything else in virtual reality right now. The closest thing at the moment is Adventure Lab, which launched in May as an escape room service guided by a live performer. The Under Presents launched late last year as an exploration of live theater with a fascinating mixture of live performers and pre-recorded characters.

Here’s how Jamie Feltham described it:

The Under Presents is an experience of two halves…You enter The Under, an otherworldly club that can only be described as Lynchian in nature. It is a strange and wonderful place; you’ll discover a stylish cabaret room with a rotating variety show that suddenly sprawls out into an expansive, mystic dune, the horizon populated with misplaced landmarks. Crabs spring up from beneath the sand to pinch items away from you and the stage itself is housed neatly inside the remains of an enormous behemoth of a ship, left upturned and dried out. If you weren’t already getting Lost island vibes, wait until you discover the hatch in the sand.

This is The Under Presents’ multiplayer and live segment and where it’s at its most fascinating, clearly influenced by the silent social discovery of games like Journey. When you boot up the game, you’ll be loaded into this area with other players (you can go offline, too). There’s no mic support; every player is totally mute save for the ability to click your fingers to help draw attention. From there you’re free to watch shows, which include elaborate dance numbers and comedy routines, or you can venture out into the wastes to explore.

This new production is not available in the Steam version of The Under Presents and its launch accompanies a shift to pricing for the overall project, at least on Rift and Quest. Now the introduction to the software is free — providing roughly 45 minutes of gameplay, according to Tender Claws — with an in-app purchase of $11.99 buying The Timeboat single player experience and granting “ongoing access to The Under multiplayer space.”

The Tempest In VR

With The Tempest, “Ticketed showtimes will be held throughout a 4-hour window (4:00pm – 8:00pm Pacific on weekdays, 11:00am – 3:00pm Pacific on weekends) every day from July 9 through the end of September. Tickets are available as an in-app purchase within The Under Presents. Participants can purchase tickets in advance at the Tempest box office within The Under; a handful of day-of tickets will also be available on a first-come, first-served basis.”

The actor for my preview performance was Michael Bates and the narrative he delivered blurred the lines between reality and fiction. The idea is that COVID-19 destroyed a physical stage production of The Tempest and now he’s using VR and his visitors to create a simulated version with dreamy scenes.

Participants are tapped to dress up in costumes and pantomime parts of the experience which play out as much in virtual reality as they do in the imagination of the player. That’s a remarkable feat and exactly what makes this unlike anything else in VR right now. The Tempest is a fascinating evolution for both Tender Claws and The Under Presents.

Each performance will be different because there are six to eight player groups per actor and shows can run simultaneously led by different actors.

“We’ve learned so much from running The Under Presents over the past seven months with live actors and had been exploring ways to expand that unique world and create other avenues to highlight our performers, and the pandemic ended up making a lot of loose ideas coalesce,” explained Samantha Gorman, co-founder of Tender Claws, in a prepared statement. “With a lot of uncertainty for actors as theaters closed, and with everyone stuck at home seeking safe ways of meaningful human connection, The Under Presents inadvertently became a lifeline in many ways. With The Under Presents: Tempest we’re extremely excited not only to create something new for our actors and fans, but also to continue to push the envelope for what virtual performances can be…”

The post Shakespeare’s ‘The Tempest’ Provides Charming Live Theater From The Under Presents appeared first on UploadVR.

Source: Shakespeare’s ‘The Tempest’ Provides Charming Live Theater From The Under Presents