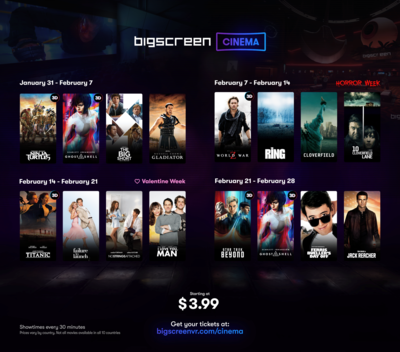 Horror week is kicking off in Bigscreen starting today at 5:00 PM PT featuring The Ring and other terrifying movies like Cloverfield and World War Z. The lobby has a new look too, shown in the image above.

From February 7th (today) until next Friday, February 14th Bigscreen will be showing World War Z (3D), The Ring, Cloverfield, and 10 Cloverfield Lane as the featured films in Bigscreen Cinema. This means you can purchase movie tickets starting at $3.99 to meet up at a virtual movie theater that goes to great lengths to simulate the movie-going experience from the comfort of your VR headset at home.

Here are more details on Bigscreen Cinema specifically and you can see the rest of this month’s movie lineup in the image below:

According to Darshan Shankar from Bigscreen, they’re working on a bunch of new features that are coming soon:

For more on Bigscreen and/or Bigscreen Cinema check out the official website and don’t forget you can watch our live in-VR news talk show podcast, The VR Download, from inside Bigscreen every week as well.