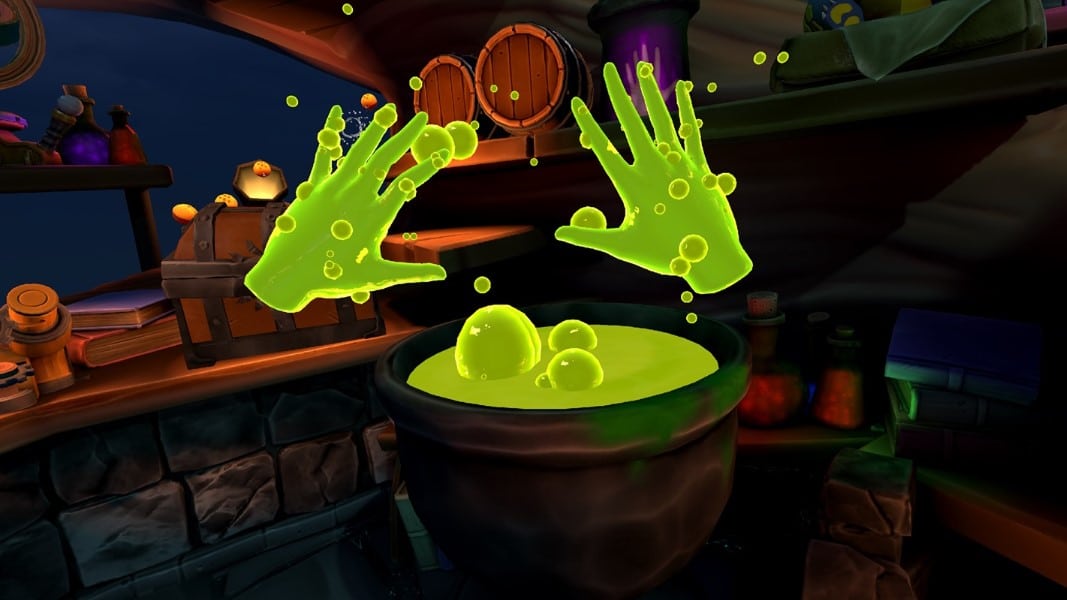 Elixir is a free hand-tracking demo game for Oculus Quest developed by Magnopus and Facebook Reality Labs. You can download it and play it right now!

We went over some early impressions of the hand tracking and Elixir itself back at Oculus Connect 6 last year, but now that Elixir is out for the public as well you can download it for free. I just played through the entire short demo experience in about 10 minutes — it’s basically a very simply puzzle game.

You’ll need a reasonably sized playspace to move around, roughly 6.5 by 6.5 feet, and your hands. That’s it. No controller required!

Things start out simply enough with you learning how to teleport using hand tracking by making a triangle with your fingers, Tien style, and then pinching both your index fingers to your thumbs. It’s neat, but isn’t ever used again after you learn how to do it. The actual experience is fully roomscale.

There’s a sorceress that wants to hire you as her new apprentice, but naturally, all you can manage to do is muck stuff up. Every time she tells you not to do something, you’re expected to do just that thing until everything in her dungeon is exploding and messing up. It’s very cute, pretty funny, and full of lots of clever interactions that morph your hands into various things.

For a free app that shows a bit of what you can do with hand tracking, it’s certainly worth the download. And if you really like this brand of whimsical fun, consider giving Waltz of the Wizard a try, which just got full hand tracking support today too.

Download Elixir for Quest now and let us know what you think down in the comments below!