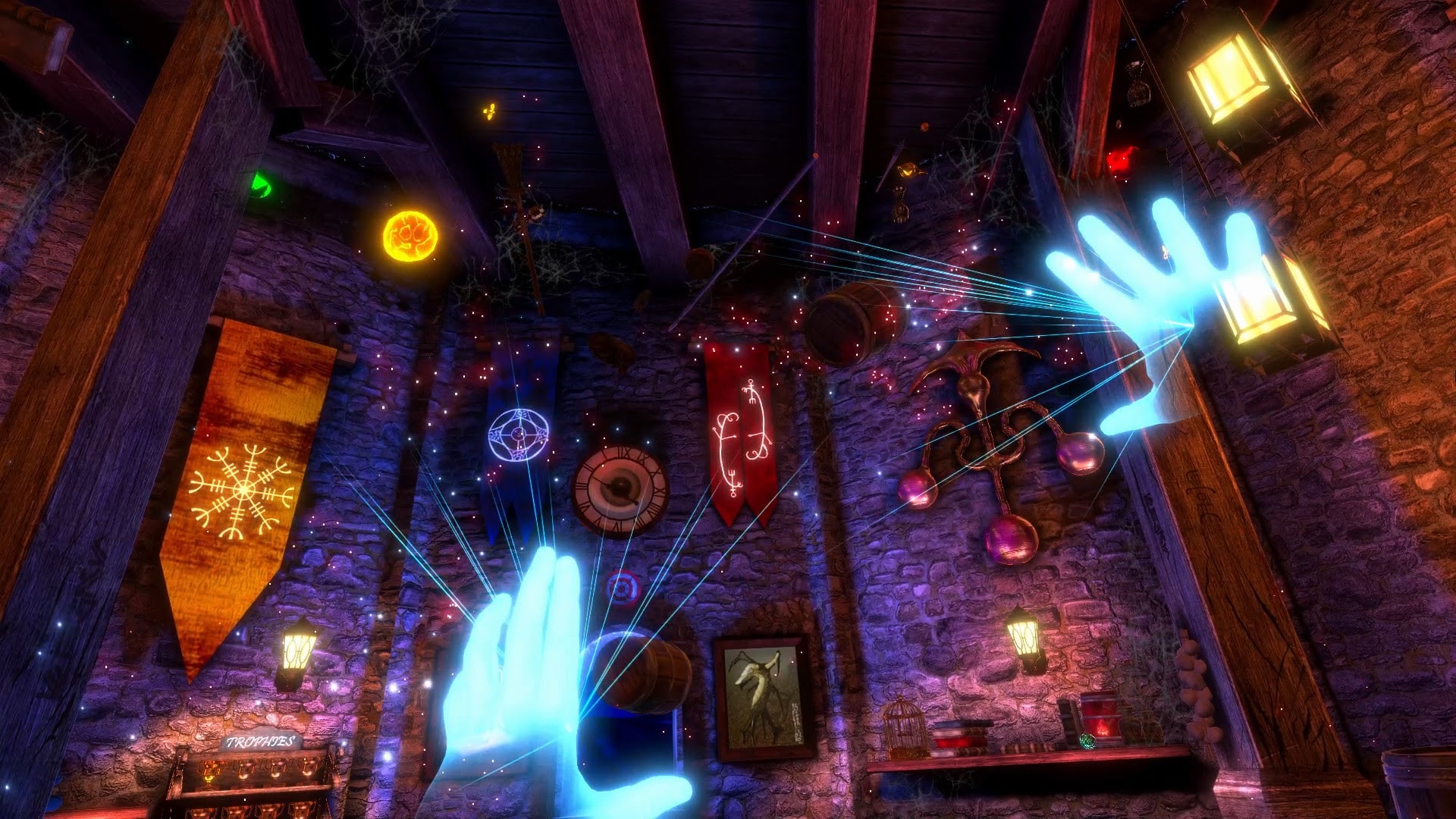 Oculus Quest owners can now wave their hands in the air to wield magical forces, play music on a xylophone by just pressing their fingers against an invisible instrument, turn dials by pinching their fingers together and move across large distances by pointing where they want to go.

Waltz of the Wizard from Aldin Dynamics was one of the first generation of room-scale consumer VR games from 2016 to work with fully tracked controllers. Now, it becomes one of the first games to adapt those features to Facebook’s open-air, controller-free hand tracking system on Quest. Facebook rolled out v17 of Quest’s system software this week and with it the first Oculus-approved games compatible with the experimental input system. The latest update for Waltz arrives alongside The Curious Tale of the Stolen Pets as the two become the first full games with the feature. While the latter is largely a stationary game, Waltz uses a “telepath” movement system and gesture recognition to bring the game’s magical playground to a completely new input system.

I spent some time with v17 on my Quest in a well-lit room with the latest version of Waltz of the Wizard while testing the new input system and its limits on current hardware. If you have a Quest, make sure you have v17 of the Quest software and you can download the game’s latest version now to test it yourself.

If you don’t have Waltz of the Wizard or a Quest, though, how does the controller-free hand tracking hold up? Here’s a look at what I experienced.

An Imperfect But Exciting New Start For VR Interaction

I captured the video above showing 11 minutes of continuous gameplay on Quest after spending roughly 45 minutes familiarizing myself with the gestures Aldin Dynamics is using for controller-free interaction.

I was in a well-lit room and the hand tracking seemed vastly improved as compared with the Quest’s experimental updates since December. Still, I found myself needing to attempt some interactions multiple times and couldn’t master a few others with this amount of a practice. Taking hold of virtual objects with just a pinch didn’t always feel natural and I couldn’t get all my interactions to register as intended. You can see in the video above that it’s far from perfect. Waving my hand too fast at the wrong angle and I wouldn’t hit an object with my hand as I meant to, and Aldin’s movement system occasionally popped up when I didn’t mean to invoke it. Other times I couldn’t quite get the path it drew along the floor to go exactly where I wanted.

While regularly frustrating and clearly far from robust enough to ship as the only input system on a Quest — at least on current hardware — hand tracking still remains a remarkable demonstration and an exciting first step. Again and again as I waved my arms through the air, or let butterflies land on my fingertips, or tossed virtual objects into a bowl, I found myself remembering an all-too-familiar feeling that called back to earlier demos — turning my head in an early Rift prototype, leaning with a Razer hydra hanging from my neck for positional tracking, holding Vive controllers and walking around a room. Quest’s hand tracking in Waltz of the Wizard is the next step on that journey.

Magic in your hands

VR is indistinguishable from magic and, in Quest’s first year, only the most experienced magicians were allowed by Facebook to make money from their craft. Facebook’s curation strategy worked for dozens of magic-makers who learned through countless attempts to hone their craft how to turn a pair of handheld controllers into ninja stars, bows, guns, sabers and so many other tools and toys.

While hand tracking and Waltz of the Wizard show that, right now, the lighting needs to be just right for this new magic to work, and people need to position their hands carefully for the illusion to hold, its roll-out on Quest’s one-year anniversary is a promise by Facebook this won’t always be the case.

Controller-free hand tracking is a chance for new magicians to start making illusions that will one day bring awe to even larger audiences.

The post Waltz of the Wizard Quest Hand-Tracking Impressions: Magic In Your Hands appeared first on UploadVR.

Source: Waltz of the Wizard Quest Hand-Tracking Impressions: Magic In Your Hands