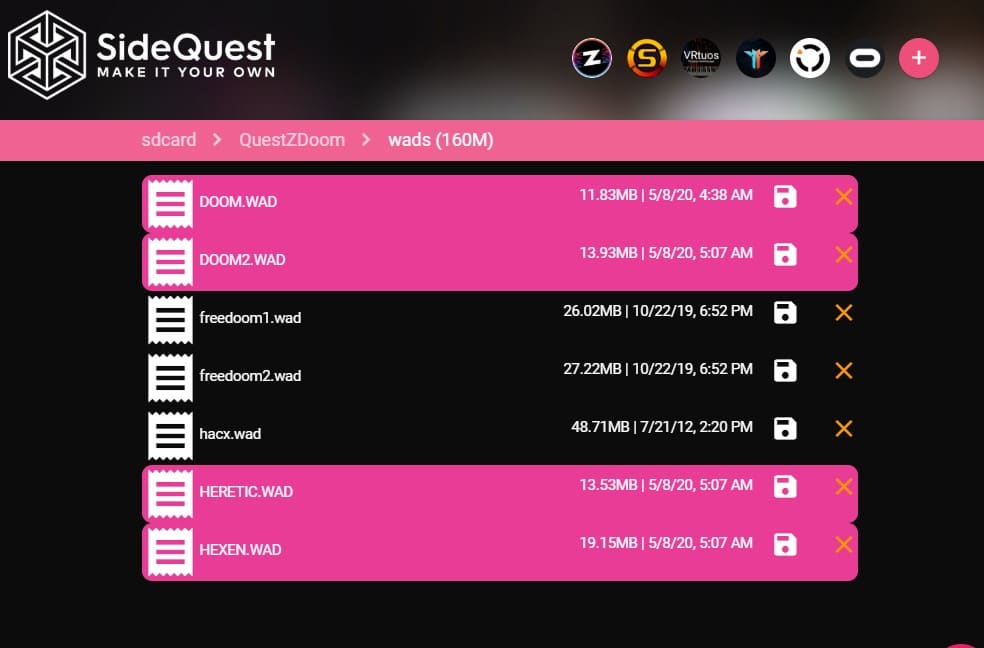 You can play DOOM on basically every gaming platform out there, as well as many objects that were never intended for video games (such as calculators and pianos) and now, as of today, that list also includes the Oculus Quest.

The Quest version of DOOM is by way of QuestZDOOM, a sideloaded launcher that enables you to access free versions of DOOM and other related content, as well as the original DOOM, DOOM II, Heretic, and Hexen if you own those games already. Included with QuestZDOOM is also a list of mods you can install to enhance the audio, change weapon textures to 3D models or voxel designs, and even new map packs.

There are two required apps to install in order to play QuestZDOOM on the Oculus Quest — the launcher and the engine. These are two separate APKs that can be installed via SideQuest.

If you haven’t used SideQuest before and don’t know how to use it, you should follow the setup instructions in our guide here. However, if you’ve used it previously and know the basic process, all you need to do is install the launcher and the engine via SideQuest and you’re good to go.

You can either follow the links above or locate the launcher and the QuestZDOOM engine in SideQuest’s Games and Apps tab or search bar.

Once installed, start the ‘launcher’ application from your list of Unknown Sources in the Library tab inside your headset. From there you’ll select which core game files to launch, such as FreeDoom, followed by any other assets or mods you want to enable.

It’s all pretty straight forward with lots of options. The user interface isn’t great for VR, it’s basically a giant window that looks like an old-school PC game launcher, but it works well enough.

Now if you want to use QuestZDOOM to play the original  DOOM, DOOM II, Heretic, or Hexen, you can do that as well — including with some of the great mods available. In order to do this you need to legally own the full games already on PC. If you don’t, there are lots of very cheap ways to grab them:

At the very least I recommend trying the original DOOM (the Ultimate DOOM version works great) to get an authentic retro feel with a jolt of blood-soaked nostalgia.

Now to get any of these original id Software games working in VR on Quest, it’s very simple:

The first time you open the launcher, a few files will need to be downloaded, which can take a minute or two depending on your internet connection speed. You’ll be able to see the files being downloaded underneath the QuestZDOOM logo. Just wait for it to finish, it works like a patcher you might see for a PC game or MMO.

From there everything is organized into columns: Core Games, Maps / Conversions, Gameplay Mods, Weapon Packs, Textures / Sounds, and Other Files.

You might notice that upon launching one of the games that the main menu is basically a 2D square in your face, but once you actually start the game everything will fall into place as a fully immersive 6DOF experience. The pixelated visuals oddly feel at home in VR, especially if you enable a weapon pack like voxel weapons or 3D weapons.

Once you get inside the game, I highly recommend immediately opening the Options and taking a look at tweaks you can make. Under ‘VR Options’ you can adjust things like your character’s height if it feels off, change the angle of snap turns, enable teleportation movement, change walking speed, and even alter the angle and size of weapons.

After adjusting those, you should go into the ‘Customize Controls’ menu and assign the change weapons button to something easy to access, like one of the grip buttons, and make sure everything like shoot, interact, and jump are easily accessible as well.

That’s about it! If you have any questions about playing QuestZDoom let us know down in the comments below and don’t be shy about reaching out to the developers (like Simon “Dr. Beef” Brown) for feedback or questions as well.

Let us know what you think!

The post How To Install And Play Doom In VR On Oculus Quest appeared first on UploadVR.

Source: How To Install And Play Doom In VR On Oculus Quest