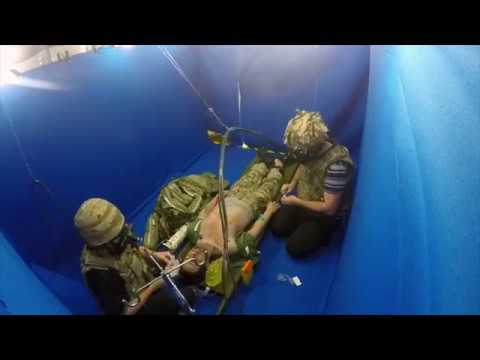 Professor Bob Stone will be speaking at this year’s Medical Innovation conference.

You can find out more about visiting or exhibiting at http://www.medical-innovation.eu/

The Mixed Reality MERT trainer is part of a unique research contract sponsored by the Medical Directorate of the UK’s Joint Medical Command via the Royal Centre for Defence Medicine. Currently, defence medics train using fixed-location, expensive and low fidelity simulators. Experiences from recent international conflicts have identified the need to enhance future pre-deployment individual and small-team training by presenting them with operationally relevant simulated environments and tasks. The HIT Team’s MERT training concept seeks to achieve this, not only by “blending” real-world, physical objects with detailed and dynamic virtual environments, such as a Chinook helicopter in flight, but also by simulating life-saving casualty scenarios whilst onboard a range of different vessels, aircraft and vehicles.

Professor Stone explained: “Our Mixed Reality concept is based on an inflatable enclosure that can be transported to different military locations and made ready for training within 45 minutes. Within the enclosure, which is completely covered in a blue material, we place physical objects of direct relevance to the training being undertaken, most noticeably a highly realistic human mannequin lying on a stretcher”.

The MERT trainer has evolved significantly from the original concept presented to RCDM, which involved filling the interior with a wide variety of physical objects – replica weapons, military backpacks, seats and so on – to create a sense of “confinement” for the end users.

Professor Stone continued: “The latest version of the enclosure enables us to do away with the “clutter” of the previous set-up by using a VR headset, modified by attaching a ‘pass-through’ camera which enables the wearer to see the real world, as well as the virtual. But we also use a technique that special effects developers call chroma key, hence the blue material. In essence, blue areas captured by the headset-mounted camera and chroma key software are ‘cut out’ to reveal the surrounding virtual environment, in this case, the simulated interior of a Chinook helicopter in flight”.
Link: