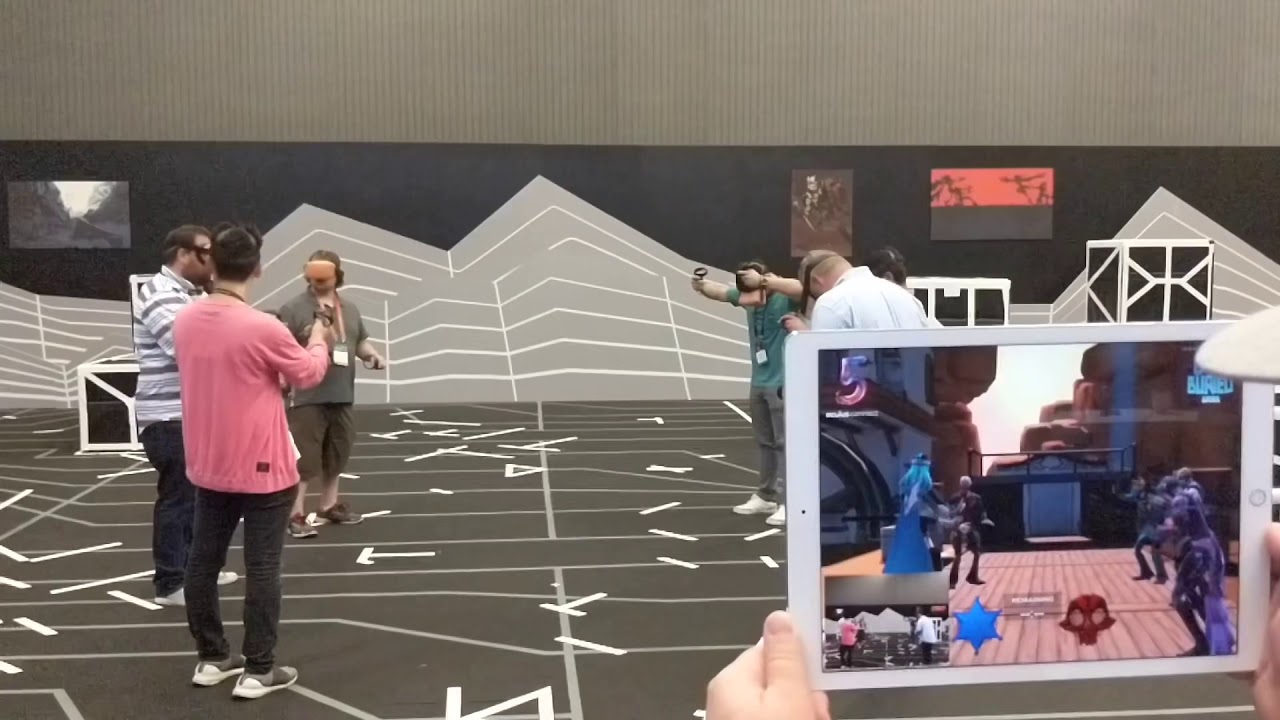 In 2018 at the Oculus Connect 5 developers conference Facebook’s VR teams showed an incredible tech demo of the still-unreleased Oculus Quest.

They demonstrated arena-scale virtual reality powered by the standalone Oculus Quest and its Touch tracked hand controllers. The demo of shared “co-location” of six Oculus Quests featured two teams of three playing shooting game Dead and Buried together — plus a tablet was able to peer into the same shared space. Check it out in the video below.

Some software developers, either inspired by the potential of early Oculus Quest hardware kits or this demo, have been working on projects that put multiple Quests in the same large-scale space. But between F8 and OC6, multiple developer conferences have come and gone since the demo with no updates from Facebook about a software development kit (SDK) to easily enable developers to build these kind of experiences.

Though some developers are trying to find alternative routes to enable and deploy these types of experiences without needing official support from Facebook, it is a risky path to take. Developers may need the Quest’s built-in Guardian system to support much larger spaces to make it fully safe — it is currently limited to around 7.6 meters by 7.6 meters.

That isn’t forthcoming just yet.

“The experience at OC5 was a tech demo exploring the possibilities of standalone headsets. Since the launch of Quest, we have focused on delivering a great consumer VR experience and have nothing new to share around co-location features at this time,” a statement from Facebook reads in response to questions from UploadVR.

Last year an incredible teaser released for a kind of sequel to Space Pirate Trainer — the defining VR wave shooter available on practically all platforms. This new title from I-Illusions, however, is far from a wave shooter. It is a multiplayer Oculus Quest game that is a bit like tag. Think laser tag but simulated walls reflect the lasers for unexpected surprises.

“Space Pirate Arena is definitely in a playable state and it will hopefully be released as an alpha for VR enthusiasts soon. We’ve held back on releasing new details as we had hoped to simplify the setup for mainstream audiences, though this might be a little while off yet,” reads a statement from I-Illusions.

Balthazar Auxietre is creative director and co-founder at InnerspaceVR, the studio behind a series of impactful VR experiences including A Fisherman’s Tale, Firebird and the charming Doctor Who story The Runaway voiced by The Doctor herself Jodie Whittaker. Innerspace also made a VR “poetic virtual garden” project called Peach Garden that worked “nicely”, according to Auxietre, in a setting of 30 meters by 15 meters with eight people simultaneously using Oculus Quest development hardware.

“While we found out the Quest is ‘technically’ capable of supporting these kinds of experiences,” Auxietre wrote in an open letter this week. “To this day there is no proper software access for developers to the guardian settings and sadly this locks us from distributing this type of content to any audience.”

On consumer versions of the Quest, Facebook doesn’t allow any third-party software or developers access to the headset’s on-board cameras. The Guardian system on Quest does let players view their surroundings through these cameras and set safe boundaries with this view. As you play in a simulated world and near the edge of the safe space, a blue grid wall shows up to warn you how close you are to the edges of the boundaries you set.

“With the developer kits we were given by Oculus a few months after the show, we discovered that we had access to the guardian settings and that even without first-party support, ‘co-location’ (multiplayer VR within a shared physical space) was not super hard to pull off,” Auxietre wrote in his letter. “We also realized that the tracking was really robust in a large scale environment.”

While The VOID, Dreamscape Immersive and many other location-based startups offer large-scale VR attractions, the vast majority operate using so-called outside-in tracking systems and even require visitors to wear backpacks or markers worn on the wrists or feet. All this extra equipment is costly in terms of both actual hardware and the time it takes to initially set up and fit to visitors. These systems are also prone to occasional bugs and occlusion. If you strap a tracker to your foot, for example, to show the position of legs in VR, the system can break if the tracker falls off. The system can break too if a player blocks the line of sight between another player and the cameras placed outside the tracked space.

With Oculus Quest, each headset knows its own location and the boundaries of the space with the information to calculate these positions never leaving the device, according to Facebook’s Oculus. Facebook refers to the point cloud it generates to identify position as a “3D map” and in a report we published in September last year, Facebook representatives said that they store these locally on the headset.

“We don’t collect and store images or 3D maps of your environment on our servers today — images are not stored anywhere, and 3D maps are stored locally on the headset [for Quest],” a Facebook representative wrote in an email at the time of our report. “That said, we’ll notify consumers if this information is required for VR experiences we provide on Quest/Rift S in the future.”

A “family friendly” multiplayer Oculus Quest project called “Oddball” was recently shown at Two Bit Circus in Los Angeles. The creators declined to answer how they sync up locations between players.

While we don’t know what methods developers are using currently, it may be possible to have Quest controllers for each headset “tap” against the same calibration point to tell each headset where it is in the same shared space.

When it comes to Peach Garden and InnerspaceVR, the developer writes: “For a year and a half now, we’ve hoped for a clear announcement from Oculus to happen in the wake of the Dead and Buried demo. While we have learned from our own experiments with the device that the hardware is mature enough to push these boundaries, it’s unclear to us why Oculus would make the decision to show this demo — which inspired us and several others — and then stop advocating for this use case entirely.”

Auxietre says he tried to contact Facebook both through its Oculus for Business program and contacts at the company and hasn’t been able to get a clear answer “as to how and when the official support for co-location and large play spaces might happen. We simply have no clue if Oculus even plans to give access to their co-location SDK either through their business program or on a case-by-case basis to selected developers.”

“We did not randomly choose the Quest as a platform for our project, we made this decision because of our confidence in Oculus’ ability to push the boundaries and open new paths for developers,” Auxietre wrote. “Today, we’re in need of clear answers.”

A Facebook representative wrote in an email to UploadVR that developers reaching out to their teams about this functionality “have been directed to the enterprise and hospitality license, which provides more detail on terms.” The Oculus for Business Enterprise Use Agreement includes the restriction that “Unless separately approved in writing by Oculus, you will not…modify the tracking functionality (including the implementation of any custom co-location functionality) on your Software or take any action that will disable, modify, or interfere with the Oculus Guardian System.” The document, last updated on January 21, 2020, also refers to a separate “Hospitality Entertainment Combination Addendum” that includes further guidelines for arcades or location-based VR experiences, requiring that customers receive “proper use” training before using the VR hardware.

We’ll provide updates on co-location as they happen. The Game Developers Conference takes place the week of March 16 and Facebook’s next developer conference F8 takes place on May 5 and 6, right before the one year anniversary of Oculus Quest going on sale.