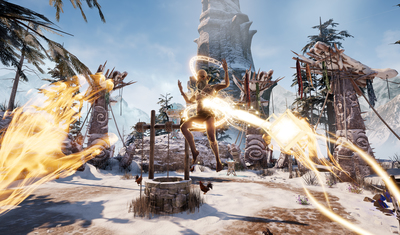 The action adventure VR RPG, developed by Sanzaru Games, is an Oculus Rift exclusive and one of the most anticipated VR games of the year.

Posting to r/Oculus, Doran revealed the full Asgard’s Wrath soundtrack is now available to stream on Soundcloud. He also addressed the topic of preloading the game ahead of its release on Thursday:

“Many of you have asked about a preload. I’ve been working with our store team to post this at midnight Thursday morning instead of 9-10am West Coast time as the download is pretty big at 80GB~.”

That means buyers excited for the game should be able to start downloading it before they go to bed and wake up with a ready-to-play VR adventure. As we previously reported, the game takes up an absolutely massive 121GB of storage on your computer. As per Doran’s comments, the actual download itself only comes to around 80GB, which likely contains compressed files that are unpacked during installing to make up that additional 41GB.

Doran also confirmed that the press embargo on the game lifts at 1am Wednesday morning PST. Stay tuned for our full review then. In the meantime, you can read David’s impressions from earlier this year at E3, which includes 20 minutes of gameplay footage.

Are you excited for the game? Is anybody taking time out of their schedule to devote to Asgard’s Wrath? Let us know in the comments.