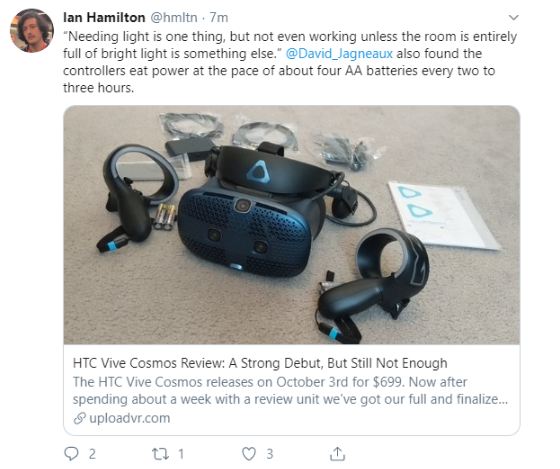 HTC addressed some common user and reviewer concerns relating to the newly-launched Vive Cosmos in a new blog post.

Last week, we posted our review of the headset. In a nutshell, the headset is a mixed bag and in a difficult spot. While there are some elements David liked, he also had some criticisms and struggled to determine what place the headset holds in the current market.

In particular, David found that Cosmos used AA batteries much faster than expected. Unlike the Oculus Touch controllers, which take one AA battery each, the Cosmos takes two for each controller. This adds a fair amount of weight, but David also found that one pair of batteries only lasted 2-3 hours in a Cosmos controller.

HTC claims in its blog post that batteries in the controllers should last somewhat longer than that.

“A figure that has been previously reported [regarding controller battery length] is incorrect, and unfortunately, widely circulated,” the blog post reads. “We’ve seen a wide range of performance and expect four to eight hours depending on light, environments, type of content, and other variables. The quality of the battery itself may also impact longevity.”

For comparison, over the last week David played a hotly anticipated game on the Rift S for review purposes and hasn’t yet replaced the batteries in his Touch controllers after 20 hours of playtime. Even if some Cosmos buyers are getting 4 to 8 hours from two AA batteries in each controller, that figure remains significantly lower than the direct competition.

David also found that the inside-out tracking was iffy in low lighting situations, particularly during the evening, and noted Rift S performs better in the same conditions.

HTC addressed some of these tracking concerns in their blog post, stating that “plain walls with a lack of defining features could affect tracking.” They also noted that they’re looking into the low-light tracking problems, and acknowledged that some people were getting frequent messages that they were in a “dark environment” when trying to use the Cosmos in low light. An firmware update to address the frequency of that notification is live already and HTC claims they will continue to fine tune the tracking with future updates.

HTC also acknowledged that some titles aren’t launching properly on the system and will release a fix this week. They’re also working with developers to update titles that don’t have Cosmos-compatible controls yet.

You can read more details on all of the above, and more, in HTC’s blog post. HTC CEO Yves Maitre also recently spoke about competition in the market and his thoughts on the Cosmos’ reception.